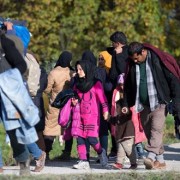 Migrations, migrants and debates on the impact of international migrations have recently been put centre stage in political debates and in the interests of the general public. Migrations, as old as human history itself, are in the centre of the social interests of (mainly) the Western world. Although a number of sociologists (Castells, Bauman, Giddens, Beck, Urry) have suggested that the twenty-first century would be characterised by mass migrations for economic, political, environmental and other reasons as well as by intensive intercultural contacts, it seems that the current ‘refugee crisis’ – as it has been labelled by the European political stage – has caught just about everybody by surprise.

The fact of the matter is that the number of migrants has been increasing year by year and today it is the largest since the Second World War. In 1970 there were approximately 81.5 million international migrants worldwide and in 2000 there were 175 million of them; according to the estimate by the International Organization for Migration, there were as many as 230 million migrants in 2013. Contemporary international migrations differ from past migrations in the following respects: an increasing number of temporary migrations that are related to economic activities in the third sector, a higher number of chain migrants, the feminisation of migrations, the concentration of migrants in the countries of the developed world, the politicisation of the migrant issue, an increase in the number of illegal migrants and asylum seekers, etc. While classical theories of migration mainly focused on structural factors and economic aspects, contemporary sociological reflection cannot avoid the significance of social, cultural, media and other aspects that permit a more in-depth understanding of contemporary migrations and their social and other effects.

In comparison with the past, public debates on migrations and migrants nowadays are more emphatically characterised by a distinctive discourse of fear, nationalism, racism, victimisation, culpabilisation and criminalisation. Consequently, migrants are presented as potentially dangerous, criminal and ‘guilty’, as those who are threatening ‘our’ culture and ‘our way of life’, rather than those who are looking for how to survive, to find a refuge or better circumstances in which to live. Migrants have become a convenient weapon in the hands of political populism and radicalism, an excuse for the ‘institutionalised’ infringement of human rights and for the restructuring of European societies into enclaves of territories surrounded with barbed wire and under close surveillance.

However, the xenophobic discourse refers only to the migrants who are situated at the lower echelons of the labour market, whereas at the same time the public does not seem to problematise the migrations of the highly qualified workforce within the EU – as long as they are not considered a brain drain to our disadvantage. This double and hypocritical response to migrations coincides with the polarisation of the labour force into very well-paid, specialised workplaces and the ever more precarious others, that is, with the crisis of the middle class. The current European policy of closing land and sea borders follows on the fears and social insecurities of citizens. Simultaneously, it is a reflection of the decision makers’ unreadiness to address worldwide safety, development and climate challenges, as well as the challenges regarding the integration of migrants. What will follow? How to react appropriately? How can sociologists contribute to the coexistence of migrants and others?

You are kindly invited to submit an abstract (800–1000 characters including spaces) relating to the main topic and/or individual section topics (see section topic at the bottom of this page) to the section chairs or contact persons by 5 September 2016.