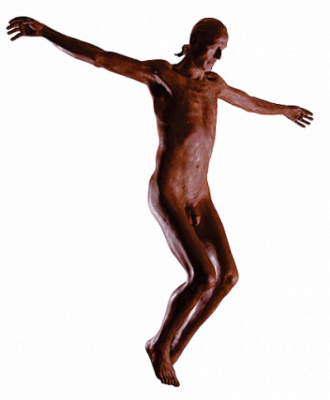 This week’s entry is, theory-wise, inspired by the Introduction and the first chapter of Robert Orsi’s History and Presence (2016), while I draw upon an example of a controversy surrounding a six-foot-tall chocolate sculpture of a crucified Jesus Christ titled Sweet Jesus (Fig 1). I stumbled upon the latter while researching the fascinating history of the Eucharist controversy as masterfully portrayed by Orsi. While I was aware of the notion of transubstantion, I wasn’t, perhaps as a non-Catholic, quite familiar with its significance in the Catholic/Protestant divide. I’ll also briefly discuss the article by Julia Cassaniti and Tanja Marie Luhrmann (2011) “Encountering the Supernatural: A Phenomenological Account of Mind”.

Sweet Jesus was to be at the centre of an installation called My Sweet Lord, serving as a remainder of the approaching Easter holidays in 2007. Cosimo Cavallaro, the artist, intended Sweet Jesus to be visible for sever hours during Holy week, “the time of the year when Christians recall Jesus’s institution of the Eucharist at the last meal” (Orsi, 20016: 1). The art work would be on display each day between 6 PM and 7 PM, while on the Easter Sunday, the installation was to be on view from midnight to 1 PM, marking the moment “when Christians believe an angel rolled the stone away from the mouth of Jesus’s tomb” (Ballard, 2014: 239). The nude was moulded from two hundred pounds of Swiss chocolate and suspended by a wire over the outline of a cross chalked on the floor.

Or at least so it was intended to happen in the LAB gallery of the Roger Smith Hotel, New York. The announced intentions of the gallery were met with fierce protests, namely by William Donohue, the president of the Catholic League, and by Edward Cardinal Egan, the archbishop of the Archdiocese of New York.[1] Cavallaro received death threats, as did Matt Semler, the creative director the gallery, resulting in the exhibition being scrapped altogether. Semler felt forced to resign by Donohue’s statements, which he charactirized as “a Catholic fatwa”, while the archbishop pf New York, labelled My Sweet Lord as “one of the worst assaults on the Christian sensibilities ever”[2].

While one may well examine the controversy through the lenses of food art, indeed focusing on food within religious constellations of the sacred (Ballard, 2014)[3],  I feel that using the Robert Orsi’s work on Catholic presence of God in the Eucharist goes a long way to explain the viciousness of the Catholic response, especially when one takes into account Cavallaro’s pronounced intentions. In a TV interview[4] he said: “My intention was to celebrate this of Christ, and in a sweet, delicious, tasteful way.” Asked why he’d used chocolate, he replied: “Because it’s a substance that I like. And it’s sweet. And I felt that the body of Christ, the – meaning of Christ, is about the sweetness. […] my intention was to have them [the public] taste the [body] – and feel what they’re looking at in their mouth”. Indeed, by using chocolate, Cavallaro wanted to convey the sweetness of the divine. In a crucial statement, Cavallaro connected his personal experience of chocolate with “the mystical/transcendental quality and rushes of memory associated with the Catholic ‘Wafer received during Holy Communion”[5].

This ties in well with Orsi’s work. Author consciously positioned Sweet Jesus within the Catholic ontological discourse of God’s real presence in the Eucharist, perhaps invoking in the Catholics the accusations of the “horrors of the Eucharist as […] sacred cannibalism” (Orsi, 2016: 19). Unfortunately, the reports don’t mention any Protestant opinion of the matter, rather focusing on the Catholic anxiety of the idea of millions of members of public, going to or returning from work, tourists and others, who might accept Cavallaro’s invitation to taste the chocolate sweetness of Christ’s body.

For the Catholic church, presented in this controversy by the New York archbishop this presents a two-fold problem. The first was portrayed in the Oris’s text via his mother: non-Catholic passers-by would, perhaps involuntarily (and without any supervision) taste the chocolaty Jesus Christ body, the real presence. Orsi’s cites Cardinal O’Connor, with whom his mother sharply disagreed, as saying that only in “grave necessity” can a non-Catholic be permitted to receive Communion, adding: “To receive Holy Communion […] means that one believes one’s receiving […] Christ Jesus himself”. Orsi’s mother believed – perhaps as did Cavallaro – that the presence of Christ in the Host should be shared, “who dares to keep anyone away from God really present in the Host?” (Orsi, 2016: 2). This leads me to my second consideration, to the “perennial dilemma of Catholic authority” (ibid, 29). There would invariably be Catholics among the passers-by, looking up to the sweet body of Christ, tasting the real presence in their mouths, perhaps wanting more, perhaps imagining Jesus Christ the next time they’d unwrap a sweet chocolate bar. The Catholic church had to put a stop to that – as Orsi says, the main problem of real presence for the Church is the regulation of accesses: “Such control is one of the surest grounds of ecclesiastical and political power” (ibid). I believe we can understand Catholic League’s ferocious protests as the logical continuation of Rome’s insistence on the control of its religious capital in order to maintain the obedience and submission. As Orsi writes, “the precincts of presence needed to be guarded against the faithful who were endlessly resourceful in breaching them” (ibid, 29). And yet, the presence forever “exceeds the bounds set for it”.

And finally, Church’s relentless need for the control of the supernatural presence may well partly explain Cassaniti and Luhrmann (2011) findings on the absence of supernatural in the everyday life of United States citizens. Had the Church granted the idea of Catholics experiencing the supernatural of Jesus Christ via their taste buds, as in the example of Sweet Jesus, the Christian supernatural might become more ubiquitous, open to more than just the sight and hearing, open to it being tasted, smelled and felt.

[3] Or the political implications of using chocolate with its complicated global history or indeed the inevitably uncomfortable questions of race that come with it.